John Cooper, manufacturer of the Cooper Climax Formula 1 racing car, which, driven by Jack Brabham, had won both the 1959 and 1960 World Championships, was immediately   impressed by the prototype Mini and convinced that it had great potential as a competition car. He eventually succeeded in convincing Sir George Harriman, head of BMC, to let him develop a high-performance version, the Cooper. This became an immediate commercial success, representing 20% of all Mini sales within a year but also as the Cooper S would   go on to achieve outstanding success as a rally car.

Launched in September 1961, the Mini-Cooper was easily distinguishable by its two-tone paint scheme, red and white cars had a black roof, blue, green, grey and yellow cars had a white roof. Other external features included unique chromed radiator grilles, bumpers with overrides and nudge bars and, of course, the addition of the Cooper name to the badge. Under the bonnet, the 848cc engine had been enlarged to 997cc, twin SU carburettors were fitted and a 16-blade fan replaced the earlier 4-blade fan. Internally, the top-of-the-range features included a vinyl-covered dashboard with an oval instrument panel comprising three gauges (a central speedometer with a water temperature gauge to the left and an oil pressure gauge to the right), two-tone upholstery, fully-carpeted floor and a  remote gear change. In the boot, a carpeted wooden platform on metal supports replaced the rubberised mat to cover the spare wheel and battery. 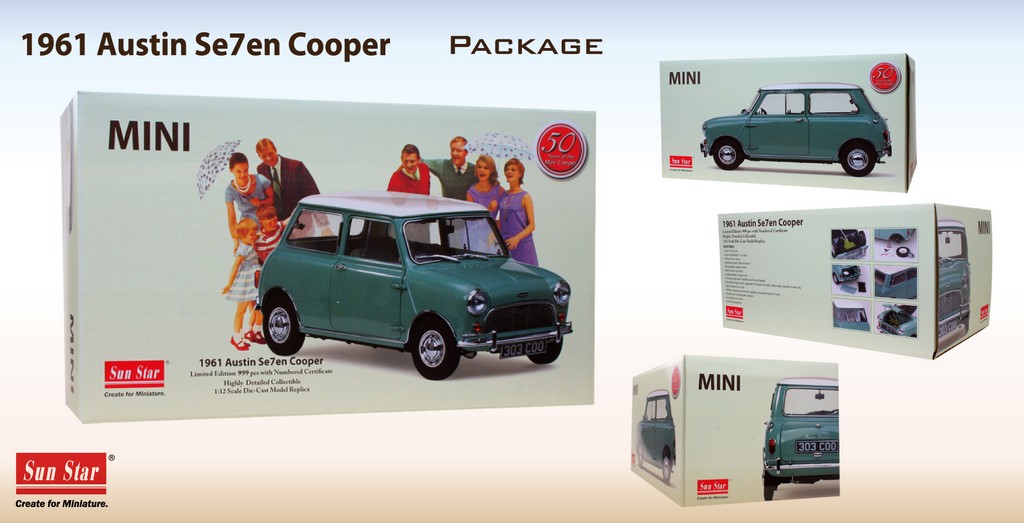